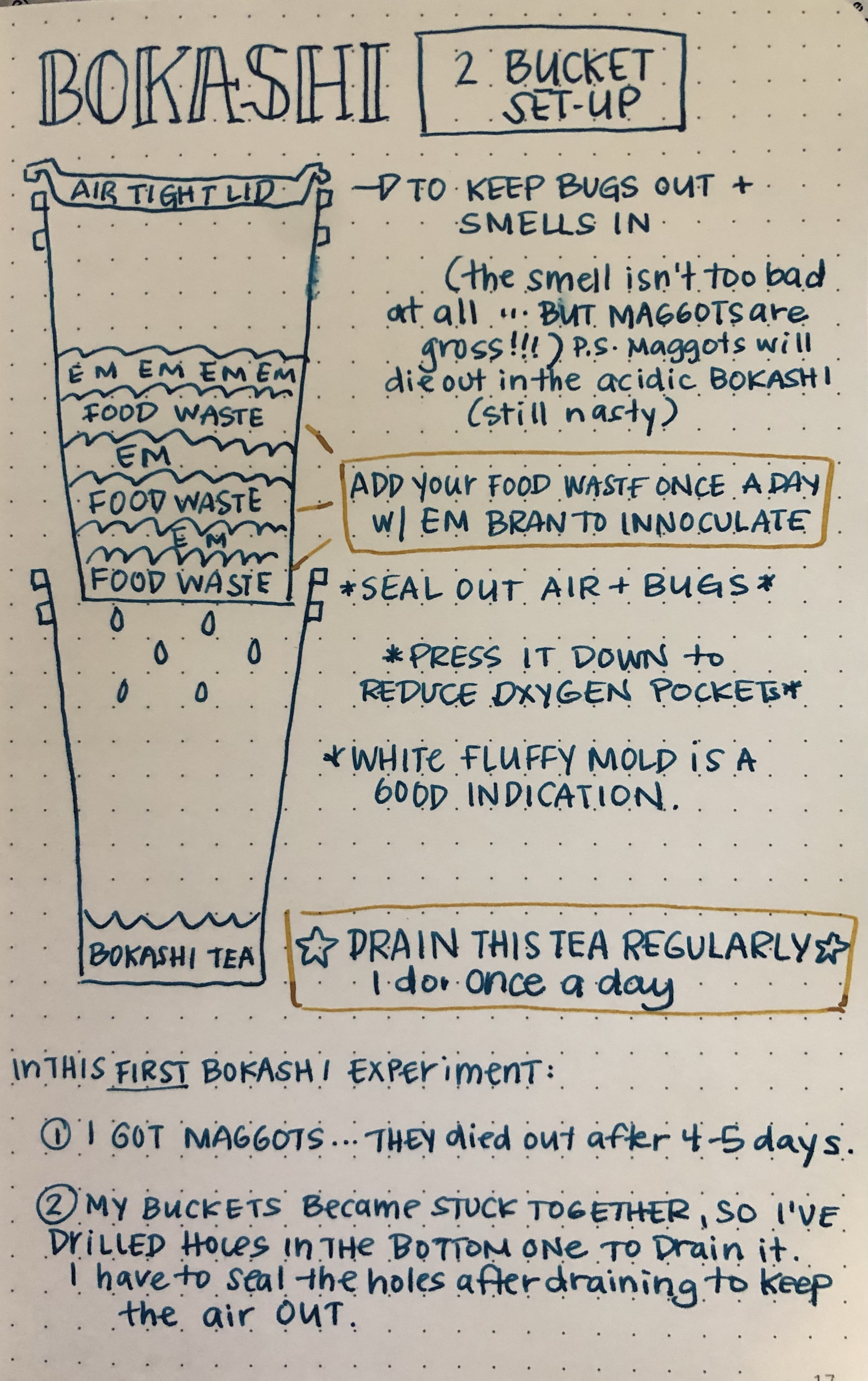 Helloo! If you didn’t read the INTRO to my BOKASHI JOURNAL, it’s HERE. It lines out my reasons for doing Bokashi, and also outlines the basic steps that I’ll be journaling about as my bucket of food waste turns into soil for my garden. For this project, I opted NOT to buy a commercial Bokashi system.

Here’s a quick reference: WHAT CAN I PUT IN THE BOKASHI BUCKET? + WHAT CAN I DO WITH BOKASHI TEA?

Once you have your buckets ready, you can begin the STEP 1 process. That is, to collect and begin fermenting your food waste. Start by sprinkling some BOKASHI BRAN at the bottom of your top bucket. Then add a layer of your food waste. Make sure that it’s cut or broken into smaller pieces, so the fermentation will go all the way through the pieces during the process. Then, sprinkle a little more BOKASHI BRAN on top of your food and press it down with some plastic wrap or a plastic insert. Leave the wrap or insert on top and place the lid back on your stacked buckets. You’re trying to reduce the amount of air contacting your old food.

During STEP 1, you will check the bottom bucket for liquid, ‘Bokashi Tea’ daily. If there is any, pour it off and re-stack your buckets. For the first few days, I had no liquid at all. Now, I’ll usually have around an ounce of liquid per day. Depending on what foods you put in, the amount, color and even smell of the tea can change. You will also continue adding food and BOKASHI BRAN in layers, pressing down to remove any extra air. When the bucket is finally FULL of pickling food waste, we can begin STEP 2.

WHITE FLUFFY MOLD IS GOOD! BLUE OR GREEN OR BLACK IS BAD. You’re gonna get mold. White fluffy mold is GOOD and it’s a sign that the microbes you want to flourish in your bucket are doing well. Competition for the white mold include the other colors of mold. And if any other colors start to grow in there, you should cover it with more BRAN. Diversity is great for humans, but in the Bokashi bucket, we are looking to encourage the EM-1 growth. I ended up getting a blue mold that formed in some condensation on the sides of the buckets. I scraped the droplets down with a spatula and covered it heavily with bran; All has since been well! I once thought I had black mold growing in the bucket one day, until I poked around and remembered I threw some spent coffee grains in the bucket the day before. Heheheh, silly me. All was well.

BOTH BUCKETS SHOULD BE THE SAME SIZE! I had one bucket lying around the yard after a previous project, but I needed to get one with a fitting lid, so I ended up with two different brands of buckets. I was pretty sure they were exactly the same size (I mean why not?!?)… until I could NO LONGER remove the top bucket from the bottom bucket in order to drain out the Bokashi Tea. I’ve been adding food waste to the top bucket for about 3 weeks now, separating the buckets to drain the tea, and I’ve experienced some vacuum seals that I’ve had to break with lots of prying and twisting… this time, the seal would not break. I am now convinced that my bottom bucket is slightly smaller than the top one… oooops! Either way, I can no longer take apart the buckets.

Here’s how I fixed it: I drilled a small hole about 2 inches from the ground in the bottom bucket. I also drilled a larger hole right near the ground on the opposite side of the bottom bucket. Now, I can pour the tea out. I then seal the holes with some good tape to keep the air out! Bokashi is an anaerobic process so I don’t want to leave these holes open. I also don’t want to let the tea drip out everywhere. As it turned out, this fix made emptying the tea WAYYYYY easier. Maybe those commercial Bokashi systems with a spigot sound like a great idea…

THE TOP BUCKET SHOULD HAVE AN AIR-TIGHT SEAL. Again, Bokashi is an anaerobic process. The EM (effective micro-organisms) do not need OXYGEN to survive. By blocking out extra air, you help to prevent all kinds of other organisms from surviving in the bucket and competing with the Bokashi EM.

The air-tight seal also prevents insects from getting into your bucket and laying eggs (which turn into maggots) or just being gross in there. I ended up getting maggots in my bucket early-on… I’m not really sure if they got in while I was adding food waste to the bucket one day, or if it’s because my bucket has a janky lid. In the future, I will get a nice sealing twist type lid. Because maggots are fucking disgusting and I almost had to scrap the whole project. The internet assured me that the maggots would die in the acidic environment in the bucket, so I held strong. They died 8)

THE PROCESS SMELLS…. BUT it’s really not bad. It doesn’t make me gag. And I gag pretty easy. I personally would not like to keep this bucket with janky lid in my house… so it stays outdoors on a cool shelf out of any sunshine. I doesn’t really have any smells until I open the lid or drain the tea. And the only time it kinda smelled funky, is when I had maggots in there *shudder*, or if I let the tea sit for a couple of days without draining it. If I change it daily, the tea smells sort of sweet or tangy like off orange juice or Apple-Cider vinegar. We DO put a ton of orange and apple peels in there… I’m sure it depends on what you put into your Bokashi. But again, it doesn’t smell rancid. Your food should not be rotting in the bucket. You should add enough EM BRAN to make sure that food is fermenting, not rotting.

STEP 1 will continue this process of adding food waste in layers with Bokashi Bran, sealing up the bucket, emptying the tea until the bucket is FULL. I’m not there yet. This wouldn’t be a fun science journal if I waited until the end to write about it. I will post again soon when I am ready to move onto STEP 2. It shouldn’t be long, as my bucket is now almost full 8).

Want to order something custom? Email me!!